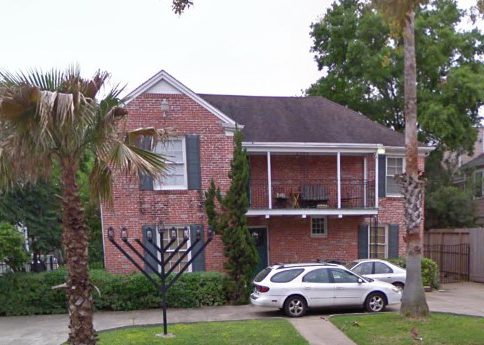 Houston — Tzipora Mintz’s first concern when her husband learned he had to come here for medical treatment in early 2003 was his health. He had lymphoma, an advanced form of the cancer of the immune system.

Her second concern was housing. She and her husband — a young Orthodox couple from Brooklyn, they had recently had a new child — would be spending months, on and off, in Houston, while he received care at the Texas Medical Center.

The Mintzes found a home-away-from-home at Aishel House, a decade-old, nonprofit hospitality apartment complex under the auspices of the Chabad at Texas Medical Center; it has grown in recent years from a single apartment to an entire building with 18 units. A Jewish version of the Ronald McDonald House charity, Aishel House offers its services, charging a nominal fee that is often waived, on a non-sectarian basis.

Aishel House, across the street from Rice University and near Texas Medical Center, a 1,000-acre site that calls itself the largest medical center in the world, is the creation of Rochel and Rabbi Lazer Lazaroff. The couple are Chabad emissaries who have headed the Chabad House for 16 years and have suffered the death of a baby daughter. They say the loss of Chaya inspired them to reach out to other families facing serious illness.

Tzipora Mintz (not her real name) and her husband stayed at Aishel House for nearly 10 months; Mr. Mintz succumbed to lymphoma in early 2004.

For families like the Mintzes, who face extended periods of out-of-town medical treatments for life-threatening illnesses like cancer but lack the financial resources to pay for long-term hotel bills, facilities like Aishel House are a growing trend in the Jewish community. For decades the Jewish community has sponsored “Shabbos apartments” within walking distance of hospitals for religiously observant relatives of the infirm. Programs like Aishel House in several American cities, including New York City, which offer 24/7 housing, recognize that families often need somewhere to stay beyond Friday night to Saturday night.

Many Jewish families, especially Orthodox ones like the Mintzes, feel more comfortable in a Jewish milieu, where kosher food and a Jewish taam are available, the Lazaroffs say.

Aishel House (www.aishelhouse.org; [713] 522-2004) is the largest-such hospitality apartment program under Jewish auspices in the country, they say. In addition to the scores of volunteers who assist the Lazaroffs, students from local religious schools have made Aishel House a popular place to fulfill their chesed service.

About 60 percent of the people who stay at Aishel House are Jewish, observant and non-observant, Rabbi Lazaroff says; the others are mostly Christians, many of whom have never met a Jew before. “People that are not Jewish are in need as well,” he says.

There is often a waiting list, up to 30 people at a time.

Aishel House’s annual budget of $500,000 comes from private funds raised by the Lazaroffs — it receives no government aid.

Long-term tenants living in eight of the units provide some income to Aishel House. As they move out, the Lazaroffs convert the units into housing for visiting patients and their families.

In addition to the furnished apartments, which include microwave appliances and cable TV, Aishel House offers transportation to-and-from hospitals and airports, kosher meals, counseling, and day care for children. Rabbi Lazaroff has received chaplaincy training. Rochel Lazaroff, who cooks the program’s kosher food in her own kitchen, makes dozens of challahs each week for Jewish patients in the medical center.

“This is not your typical Chabad House,” Rabbi Lararoff says. “For us it’s not a career, it’s a passion,” Rochel Lazaroff says.

Visitors join the Lazaroffs at Chabad House worship services, and at Shabbat meals. “The whole idea is not just to provide housing,” the rabbi says.

The loss of a child sensitized the Lazaroffs to the physical and spiritual strain that a serious illness puts on a family, and a conversation with a hospitalized patient who needed a place to stay while undergoing months of treatment alerted them to the unique situation of people traveling to Houston for care, Rochel says.

Texas Medical Center is home to such renowned institutions as M.D. Anderson Cancer Center, Texas Heart Institute and Texas Children’s Hospital, which bring more than five million patients to the center each year.

Patients with life-threatening illnesses, and their kin, often turn to the Lazaroffs for emotional support. They have an idea how those people feel, the couple says, since they experienced their own loss. “It was God’s internship. God was giving us a lesson in what people go through,” Rabbi Lazaroff says. “You never know 100 percent what they’re feeling,” he adds. “You can never say ‘I’ve been in somebody’s shoes.’”
The couple now has nine healthy children.

Tzipora Mintz has kept in touch with the Lazaroffs, sponsoring parlor meetings in her home to raise money for Aishel House.

“I encourage people to support them,” she says.

Aishel House “was always my home base” in Houston, Tzipora says. “It was extremely comforting to have that to come home to.”