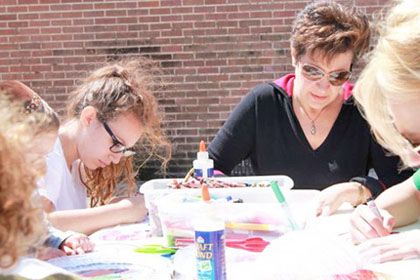 t’s no picnic to be in the hospital. Making it even more challenging, patients hospitalized during a holiday can feel particularly isolated and empty without Jewish rituals. While Aishel House delivers kosher Shabbat meals, every week, to Texas Medical Center-area hospital patients, what does a patient do for Passover?

If the patient can’t come to the Passover table, Aishel House brings the table to the patient. Aishel, refers to the hospitality Abraham extended to strangers in the dessert. With so many “strangers” in the Texas Medical Center area, at any given time, Aishel House staff and volunteers add Seders To Go to their regular Shabbat dinner deliveries.

According to Rochel Lazaroff, volunteer coordinator and wife of Rabbi Lazer Lazaroff, Aishel House officially has been making Passover Seders to Go for more than 10 years, but actually has done so since the House’s founding in 1993. However, with patient privacy laws, Aishel House has to rely on patients contacting the rabbi, who serves as a TMC chaplain, or his wife. “But now, we rely on advertising in the Jewish Herald,” said Rochel. “The patients get the Jewish Herald and see our ad that we’ll deliver a Seder, and they call us.”

A Seder To Go package includes a disposable silver-looking Kiddush cup and Seder plate with symbols, including extra Romaine and haroset, grape juice (wine by request), shmura and regular matzah to last eight days, and a Haggadah to keep. The freshly made Seder meal consists of brisket, a meaty vegetable borsht or soup, mashed potatoes, tzimmes, cucumber salad, fish and a dessert compote. “It’s the same menu every year,” the rabbi’s wife said.

The Seder plates are very colorful. Children create a design on paper, which then is hot-glued between two attractive plastic plates. Plastic cups, with lids, containing the Passover symbols, are glued to the plate.

Deliveries to as many as two dozen hospitals and medical institutions in the Texas Medical Center area require two volunteers per hospital.

An average of 16 out-of-town Jewish patients are recovering in TMC-area hospitals during any Passover holiday – the number Lazaroff anticipates this year. One year, there were 30 patients, and “it was crazy!” she said.

“A few years ago,” said Lazaroff, “Bruce Stein brought me a big tray of chocolates and said the minty ones, the spicy ones are for me.” Because the Lazaroffs don’t eat anything from outside the house during Passover, they included the chocolates (less the few eaten before Pesach) – with a note that it was a gift from the Stein family – with the Seders to Go packages. The next year, Stein brought her two trays and has does so every year after that.

Lazaroff recalled the first year she began preparing Seders to Go. “According to Chabad,” she told the JHV, “we don’t use any processed foods from out of the house. I was very self-conscious about sending this rather simple meal outside the house. We don’t use sugar or any spices; everything has to be torn or peeled. Anything I can peel or chop, we do ourselves. No preservatives; everything must come in the raw form. I put a little note in everyone’s bag to please forgive us if the flavors are different from what you’re used to.

“On the contrary, they loved it,” she said. “We use schmaltz during Passover. Schmaltz can cure everything!”

Aishel House is blessed with a wonderful cadre of volunteers, some of whom cook, others deliver food and pick up and return patients and their families from airports or drive them for shopping.

With Aishel House’s original building having been demolished (in preparation for an entirely new facility), its Passover kitchen has been confined to an 8-foot by 4-foot area. With no space for volunteers, the two-member kitchen staff will prepare the Seders to Go, along with the help of the Lazaroff children who, themselves, are daily hands-on volunteers.

Lazaroff is unable to venture a guess as to how many Seders to Go Aishel House has delivered over the years. Instead, she remembers the stories:

“A young man was here who had five children. He was dying of cancer,” she said. “As soon as the kids arrived, he took a turn for the worst. ‘You promised me you would have a Seder with the kids,’ his wife told him. He was unresponsive. Four days later, he got up, a week-and-a-half before the Seder, got stronger, and had an incredible time with his kids, in the hospital. He danced in a wheelchair, had the first Seder and died two days after the end of Passover.

“You don’t know what someone who is unconscious or in bad condition understands or knows,” said Lazaroff. “We want to bring the joy of a holiday to the patients, so they have all those smells and those memories. When you’re able to celebrate a holiday in your most difficult times, imagine the joy when you celebrate it in a good time. What a gift it was for the family that he was able to have that and participate in that. Eternally a gift.”