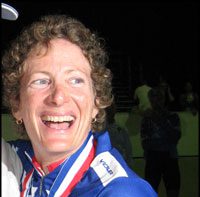 “I was wearing pants, so I felt like I should just stand in the back,” says Bono, somewhat incredulous at her discomfort.

She told Chabad-Lubavitch Rabbi Eliezer and Rochel Lazaroff, the center’s founders: “Don’t let me do anything that isn’t appropriate.”

“But they just laughed,” relates Bono, 46. “They are so accepting of everyone: The idea of looking at anyone that way just made them laugh.”

For Bono and the scores of patients who have stayed at the Aishel House – a residential project in the heart of the Texas Medical Center complex – the center’s open arms and loving embrace are a lifeline in a difficult fight with disease.

Dr. Michael Keating, a professor of medicine at the renowned MD Anderson Cancer Clinic, has noticed the Aishel House’s effect on patients.

“The family atmosphere contributes immeasurably to patient care,” he states. “When patients don’t have to worry about compromising their families while they are here, it is a gift to them. They need to have some sense of serenity.”

Patients are referred to the center by the hospital, but also come after hearing about the Aishel House from other synagogues, Chabad centers, friends and family members.

“The people who come here, they really become a part of our family,” adds Eliezer Lazaroff. “We keep in touch. There was a man who came here from New York and he and his family stayed for one full year. Sadly, despite the treatments he underwent, he passed away four years ago. Recently, we went to the wedding of his eldest daughter.”

In Bono’s case, she had travelled to Houston from Hawaii several years ago to undergo treatment for an advanced stage of stomach cancer at MD Anderson. Doctors told her that before they could surgically remove the tumor, she would have to undergo weeks of chemotherapy, but her insurance limited her ability to stay at a local hotel without incurring out-of-pocket expenses.

“I had filled out an online form and was on the waiting list for Aishel House,” an initiative of Chabad at the Texas Medical Center, which also runs campus-based programs for medical students and professors, youth projects, Torah classes and holiday services. “It was midday the day that I had to either leave the hotel or start paying $180 a night. My mother, who had been staying with me, had to fly back to Hawaii the next day, so in addition to the cost, she was worried about me being alone. Rabbi Lazaroff called to say that there was a room available.”

Aishel House first opened in 1995 after the Lazaroffs purchased a guest apartment to provide residential accommodation for patients and their families. In 2003, they purchased an apartment complex consisting of 18 units, which they have since been converting into guest units. Decorated in bright colors and resembling large hotel suites, the units are within walking distance of the medical center’s outpatient clinics.

Its name is drawn from a word in the Torah referring to the tent that Abraham erected and from which he welcomed people from the four corners of the Earth. Tradition views the word aishel as an acrostic for three Hebrew words means “food,” “drink” and “lodging.”

“Aishel is a Jewish term that touches on the specific tradition of hospitality that we get from Abraham,” says Lazaroff.

“We want people to feel that this is a home away from home,” he continues. “Here, the patients provide support to one another. For some, we provide all of their meals. Sometimes, people need to have kosher food brought to the hospital.”

“Even just the way that the room was set up, it gave me the chance to just sleep until noon and kind of be away from everyone if I needed to be,” recalls Bono. “Yet, the Lazaroffs are there in the same complex, and you know that you are always welcome to stop in. I could also spend time with other patients if I wanted to.”

Laughing, she tells how once when she was undergoing chemo, she hadn’t left her apartment all day. The Lazaroffs, concerned, sent their young son upstairs to deliver a letter and ask if everything was okay.

“The next day, their daughter brought me a bowl of soup,” she continues, “and said that she had just made it and needed to know if it tasted good. Of course, it was delicious. Even though when you are undergoing chemo, you can’t eat anything and nothing tastes good, her soup tasted great.”

Bono values her independence. A woman of unusual strength and discipline, she was at the top of her sport – placing third among a pool of cyclists 20 years younger than her – just before being diagnosed with cancer. Experts considered her a top contender for the World Championship.

Then, she woke up one day with a stomach ache. The pain grew worse. Suddenly, she couldn’t cycle. She could barely eat.

The first time she met the rabbi, she says, she could see that he was “extremely nice and extremely generous.

“We’re here for anything you need,” he told her. “If you have any questions, just let us know.”

Bono had plenty of questions; specifically, questions about Judaism that she had growing up, but never received an answer for. They were questions about life in general, and a desire, as she puts it, “to make room in my life again for something spiritual.”

Over the course of her stay, Bono began to study Chasidic thought. She also lit Shabbat candles for the first time in her life, and immersed in traditional prayer. But it was the atmosphere at Aishel House that had the most profound impact on her.

“I’d come to Friday night services, and the singing and the celebration is just so beautiful,” she relates. “The way that the Lazaroffs live, the fact that the woman of the house is so revered and respected, that the kids’ lives are not focused on television, but on higher learning, and everyone is respectful of each other, everyone is looking at the spiritual, I miss it when I am not here.”

After her treatment and surgery, Bono returned to Hawaii, but kept in touch through e-mail and phone calls. She also sent photos of Hawaii, as requested by the Lazaroffs’ children. She returned to Houston in November to fight a renewed bout of cancer, and went back home in mid-March.

During her second stay in Houston, she moved to a nearby apartment of a cousin, whom she discovered through the Aishel House.

“I had never known that I had a cousin in Houston, but the last time I came to Aishel House, one of the volunteers recognized my last name and asked me if I was related to a family she knew,” says Bono. “Now, I’m taking some time to get to know them.”