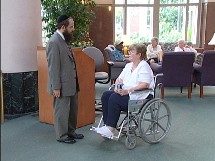 In a diary entry written only days before her death, M., a 40-year old woman from New York battling cancer, listed several things she was grateful for in her life; at the top of the list she wrote: Spending time with Dad before I go, and, Meeting the Lazaroffs and Yiddishkeit in Houston.

In his work with patients at Houstons renowned medical centers, many of which specialize in the treatment of cancer and other terminal diseases, Rabbi Eliezer Lazaroff Director of Chabad at Texas Medical Center in Houston works with patients who face the terrifying space between life and death. In the past 12 years, the Lazaroffs have been holding out hope and light for people at a time when the darkness that surrounds them can be overwhelming.

M. arrived in Houston last year for a final, desperate attempt in her 10-year struggle against cancer. Divorced, with no children, and struggling financially, M. met up with Rabbi Lazaroff on his regular rounds visiting Jewish patients in the local hospitals. For one month, M. stayed in the hospitality suite of the Chabad House, several blocks from the medical center where she was receiving treatment. M. knew that her battle was almost over, but in those few short weeks with the Lazaroffs, her life was enriched and enlightened by Jewish tradition. M. was so far removed from tradition that she didnt know what to do with the candle I handed her before her first Shabbos here, recalls Mrs. Rochel Lazaroff, By the time she went back to New York a month later, she was a different person. Physically, she was failing. But spiritually, she had never been so alive. M. passed away several weeks after leaving Houston, surrounded by family and friends in New York, but the long conversations with the Rabbi on the meaning of life, and life after death, and warm family time with the Lazaroffs eight children, who immediately treated her as an adopted aunt, gave M. insight into a Jewish experience she had never encountered.

When Eliezer and Rochel Lazaroff arrived in Houston in August of 92, the need for the vital service they provide was quickly becoming apparent. Houstons medical treatment centers were gaining worldwide renown and attracting patients from across the globe. For Jewish patients in desperate need of physical, spiritual and emotional nurturing, there had to be a full time Rabbi nearby to address their needs. For Shabbat-and-kosher observant patients, staying in Houston for the extended period of time often required for treatment posed serious problems. Chabad in Houston, an established presence since the early seventies, was located miles away, in the suburbs. So under the direction of Rabbi Lazaroffs father, Rabbi Shimon Lazaroff, director of Chabad in Texas, the couple set up house and Chabad center in the Texas Medical Center area near downtown Houston, a neighborhood populated by numerous hospitals, treatment centers, and schools of medicine and nursing, and the doctors and professors who work there.

To fully provide for a person or family suffering from a serious illness, you have to approach their condition from all angles, Rabbi Lazaroff says. In his daily rounds of Jewish patients in the local hospitals, the Rabbi takes the opportunity

to meet each one and see what he can do for them. Sometimes a person is there surrounded by family and able to afford the cost of staying in a nearby hotel and all they need is a measure of spiritual comfort and inspiration from a rabbi, he says. But some people need more than that. The Christian organizations are all there, and they are willing to help, says the Rabbi, But when you can provide physical assistance together with Jewish warmth and spirituality, youre really enriching peoples lives in a tremendous way. For those who cannot afford the cost of a hotel, the Chabad House has a private, fully equipped apartment available for short or long term stays, at whatever cost the occupant can afford. Kosher meals are prepared by Mrs. Lazaroff and delivered to the hospital daily. Families and patients staying over extended periods of time quickly become a part of the small Chabad community in the Texas Medical Center area and benefit from the nurturing Lazaroff familyan experience that is as necessary as any medical treatment they seek at this time.

For hundreds of Jewish patients and their familiesbe they unafilliated, fervently religious, and everything in between, from countries and cities that span the globethe warmth they encounter with Chabad remains with them long after their stay in Houston. Weve had people who return home and enroll their kids in a Jewish school, or become active supporters of Chabad in their city, as a result of their experiences here, says Rochel Lazaroff. In cases like M.s, where patients discover a meaning and spirituality that gives their final days such peace, family members and friends take great comfort and often begin to seek out spirituality in their own lives. And kindness has a ripple effect. People whose lives were touched by Chabad in Houston go on to touch and inspire and give more to the people around them.

When you can be there for someone physically, emotionally, and also spiritually, at a time when they need it most, says Rabbi Lazaroff, You are nurturing them in a very deep way, and the effects of that just go on and on.